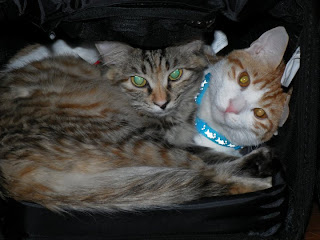 The first picture is of Kona (the orange and white cat) and Noelani (she is mostly grey with some other colors).  Kona and Noelani were part of a litter of kittens born behind the mailroom in the Consulate in Guangzhou.  Around 3 old they were scooped up and taken in so we could get Momma fixed.  In total there were 5 kittens.  I kept 2 for my mother and the other 3 all found happy homes.  Less than a week after adopting Kona and Noelani (who were now living with big brother Keiki) we recieved a call that one of the kittens from the litter had died from Parvovirus.  Knowing how deadly it is for kittens we rushed our kittens to the Vet to get them checked out.  Luckily Keik had already had all of his shots when this happened, but the kittens had not yet started their shots.  The Vet did all the blood tests she could and determined they did not have Parvo, but they did have an infection of some kind.  She gave them both medicine and a special diet.  She told us to bring them back if they got worse.  Noelani got worse right away, she was only 3 weeks old and wasn't able to regulate her body temerature.  We were keeping her on a heating pad and wrapping her with towels.  Two days later we had a follow up visit for the kittens.  Kona was showing great signs of improvement, but Noelani was not.  Her temperature was so low that the vet decided it was best to keep her for observation.  The Vet wouldn't let her come home for 2 days, but when she started showing real signs of improvement (like regulating her own body temperature) the Vet said she could come home. Kona had his own share of problems when it came time to be fixed.  He didn't take well to the anesthesia and ended up running all over the house like he was crazy.  Before we could catch him he has started bleeding.  We rushed him back to the Vet where he stayed until all the effects of the anesthesia had worn off.  I'm not sure if they were meant to be small cats, or if their rough little beginings caused them to stay small.  Noelani is a tiny 6 lbs (and she is all fur), and Kona is 7 lbs.  They have been moved to the US with their kitty visas they won in the kitty visa lottery. 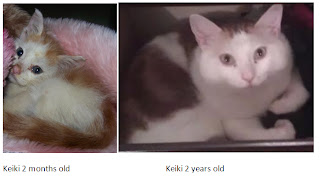 The Second picture is of my Keiki Monster.  A Consulate guard in Guangzhou found him on his way to work.  Keiki was in the middle of the road about to be run over by a car when the guard scooped him up and brought him to the Consulate Tower.  We had a momma cat (the cat whou would later have Kona and Noelani) that was currently nursing 2 other older kittens so the guard though that she might take in the new kitten as well.  I saw Keiki for the first time a few days later, he was adorable and fearless, he walked right up to me.  I had decided if he was still there when I came back from my errand I would take him in.  I came back a few hours later and he was gone.  I found out the next day that another person in my building had taken him in to be a playmate of his much bigger kitten.  Only this kitten was too big for Keiki.  Keiki himself was less than 1 pound, Rocky the hopeful playmate was well over 7 pounds.  Rocky also didn't understand that you must be gentle with the baby.  Rocky's dad offered to let me adopt Keiki since he was having to seperate the two.  I immediatly jumped at the chance to take him.  I scheduled a Vet appointment for that weekend.  The picture of Keiki was his first morning in my place, I had put him on the bed to get dressed.  When I went to put him back into the bathroom while I was gone for work I couldn't find him.  I searched everywhere thinking he had fallen off the bed.  Then I moved the blanket around and found him curled up.  The night before his Vet visit I found a really ugly spot on the end of his tail.  I made sure that the Vet looked at that first.  He told me that part of his tail was now dead, it must have been run over by a car, but don't worry it will just fall off and he will be fine.  Of course I was worried, part of his tail was going to fall off?  Then he told me how old Keiki was.  I was thinking about 1 month old since he was so small.  No, Keiki was 2 months old and less than 1 pound.  I left with the orders to feed him and don't worry he will grow and gain weight very quickly.  About 1 inch of his tail fell off, but you can't tell now taht anything had happened.  And now at 2 years of age is is a happy fat 14 pound kitty.  He's been on a diet since he was 7 months old and we've been pretty good at keeping him a consistent 14 pounds.  He has lived in two countries and loves to travel.
Posted by Amy at 10:13 PM No comments: 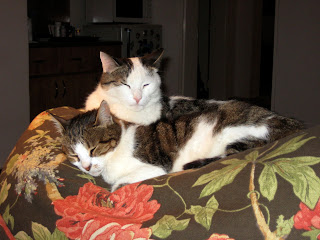 Hoover and Mr Green Eyes lived their first year on the mean streets of Baku, Azerbaijan before adopting their person.  They  have also lived in Poland and Nigeria, and spent quality time in the U.S., including a year with their grandma while their person was in Iraq.  Very contented looking cats!
Posted by Amy at 5:09 PM No comments: 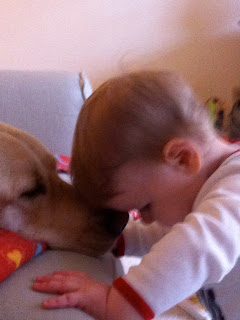 This very handsome labrador is Lincoln in Dhaka, Bangladesh.  Lincoln was adopted three years ago in Dhaka.  Lincoln likes to chase tennis balls, cuddle in laps and eat peanut butter.  His one year old human loves to chase Lincoln around the house and is allowed to pull his tails.  He is clearly very loved!
Posted by Amy at 9:23 AM No comments: 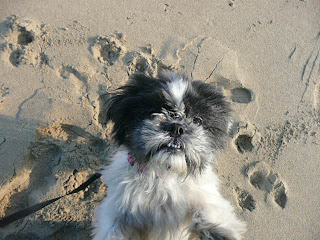 Hattie had a short but enthusiastic tenure with the Foreign Service. She happily moved from rural NH to Oakwood Falls Church, where she proudly rode the elevators several times each day and loved going for walks in the surrounding neighborhood.  She moved to Saudi Arabia but did not survive the journey.  She is buried in a quiet corner at the Consulate.  So sad. 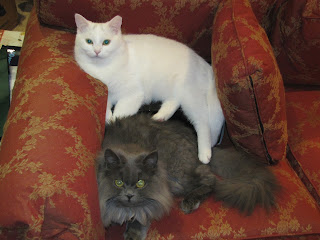 Griffin (gray) and Callaghan (white) are now enjoying a pampered Foreign Service life after rough starts on the streets of Jeddah, Saudi Arabia.  Callaghan was abandoned as a kitten.  Griffin was run over by the car as a kitten and rescued by a Consulate driver, who brought him to a local woman who took in cats.  There he met the now-rescued Callaghan, and they formed a close bond as Griffin recovered fully from his injuries.  Adopted together in 2010 and now inseparable, they'll visit the United States for a few months this year before moving to Kampala, Uganda.  They are both hoping for a plethora of entertaining flora and fauna outside their new windows!
* Also - I think they are on my former Drexel couch! 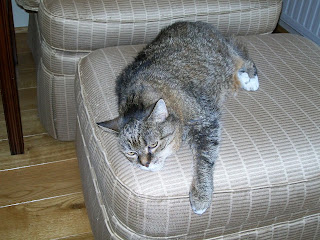 This is Bisou, she born in the US and she was about 4 months old when she came to live with her family.  She accompanied her fs people on 5 overseas tours and 3 DC tours so she took a LOT of flights in her day.  She passed away 2 years ago this week in Brussels, Belgium at the age of 20.  Anyone who says our FS pets aren't part of the family don't understand how much we go through to have our little furry loved ones with us wherever we live.
And Bisou seemed to have really enjoyed the Drexel!
Posted by Amy at 6:11 PM No comments:

United Decides to Extend the Military Pet Transport "Waiver" to Members of the Foreign Service! This is a victory and provides recognition to the Foreign Service and those who serve abroad. AFSA will continue to work to ensure we have the option to transport pets as accompanied baggage checked in at the passenger terminal and delivered with baggage and hope to work with United to make PetSafe viable globally and truly safe for pets. AFSA 's request for a meeting with United's CEO Jeff Smisek or with an appropriate Vice President resulted in a call today from Hershel Kamen, Unitedâ€™s Senior Vice President for Alliances, Regulatory Affairs, and Policy. Mr. Kamen told us that United Airlines has decided to extend its military pet travel policy waiver to members of the U.S. Foreign Service who are traveling on official change-of-station orders. This will include USG employees traveling to take up assignments in our embassies and missions abroad from all agencies.We have not received official notification in writing and are awaiting details about what the waiver provides, but this decision is a direct result of this collective action that you made possible by your quick and united action. We want to let you know right away.Huge thanks to all of you who wrote quickly and eloquently to United! Volume, speed and content combined for successful collective action and a message that was heard. This is a real success and validation of collective action for a good cause, and for standing up for the Foreign Service and what we do in service to our country. We extend our appreciation to the work of Under Secretary Kennedy and his staff and to the Director of Logistics Operations in the A Bureau to get GSA authorization to use alternate U.S. carriers or code shares. This option should remain in place because the option to transport pets as accompanied baggage is the standard we need for ourselves and for our animal companions.AFSA also extends our appreciation and thanks to six members of Congress â€" Nita Lowey, Jim Moran, Chris Van Hollen, Donna Edwards, Gerry Connolly and Eleanor Holmes Norton who wrote to United in support of extending the waiver to members of the U.S. Foreign Service. AFSA extends a big thank-you to the Overseas Briefing Center, and to volunteers from AAFSW, the Foreign Affairs Friends of Animals Network (FAFAN), the FSpets Yahoo Group as well as from our FS pet owners themselves for their great work for this cause. It would not have happened without you all!We appreciate United's decision to extend this courtesy to a large and dedicated customer group, demonstrating their appreciation of the service and sacrifice of the U.S. Foreign Service on behalf of the United States. We hope to work with United to help them improve their level of service to customers and to make PetSafe a program that is safe for pets globally.AFSA will publicize the details of what the waiver provides as we learn them. Until then, you may read about the military waiver on the pet issues page of AFSAâ€™s Web site http://afsa.org/pets. That page also includes the details of AFSAâ€™s campaign to date.Sincerely,Susan R. JohnsonAFSA President
__._,_.___
Posted by Amy at 7:21 PM No comments: 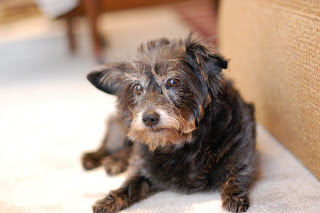 Lucy is a 7 year old terrier. She was adopted before her family grew by three daughters.  She's the eldest girl.  She loves nibbles of waffles with peanut butter for breakfast on Sundays, naps on the husband's lap, playing fetch with her girls and licking any leftover baby food of the 6 month old's face.  She snores at night.  Sometimes so loud now that she has to be nudged her so she'll turn over.  Lucy lived with her family in Manila, Philippines for three years and is now enjoying Addis Ababa, Ethiopia.  Clearly Lucy is much loved by her family!
Posted by Amy at 6:46 PM 1 comment:

If you are in the FS somehow and would like to send in photos, please email them to kennedyas@yahoo.com.  Try not to make them too huge and please include a caption.  If you have a blog I can link to it as well.